A bit more to the south and just after the Paracas trajectory, one of the most prolific cultural horizons regarding artistic production in the Andean territory begins.
Although their pottery production continues the previous thematic tradition of representing shamans, animals, and trophy heads, their traditional shapes, like the double handle and bridge jar, and their techniques change radically.  The main difference is in the attention towards color and pigment application, now before burning.  Later on, they continue to experiment with the shape, developing countless and original ones never seen before and decorated with a vast range of colors.  The clay texture continues being precise and very polished but more round-shaped and broad giving way to a greater surface where to display the color drawing.  No other culture produced more varieties of pigment nor utilized it more masterfully in clay.  They continued the linear tradition in the drawing, but rather as a sketch to the final design and with a

The expansionist culture of the Chimu eventually absorbs and unifies power, controlling the north coastal region until the arrival of the Inca Empire.  The great urban center and its capital, Chan Chan, is an example of the importance that the power administration gained by the bureaucratic classes in the Andean economies.  The great demand for products for domestic and ceremonial consumption puts greater pressure in workshops in charge of such supply. For that reason, production becomes massive, manufactured in molds and with minimal decoration.  The clay color is controlled by oxidating the pieces in the burning process, resulting in a uniform black color and lustrous finish;  the shape of the handles change to a square-tubular, and it is characterized by a particular and diminutive decorative element at the junction. 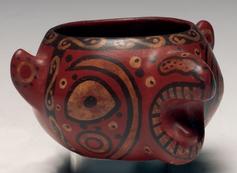 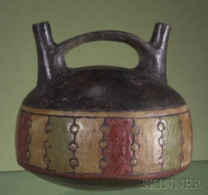 Located in the south side of the Titicaca Lake towards Cochabamba, Tihuanaco shared and fought with the Huari Empire, with whom they developed common religious and iconographic elements.  Their pottery art is rigorous and formal, lacks secular elements, and reflects a culture of conquest.  The shape of their vessels tend to be limited to a few practical models, being the “kero” the most original and recognizable; it will continue that tradition and will evolve until the times of the conquest.  The fauna is the main theme of their molded vessels, along with their mythology.  The decoration method “par excellence” is with slips of up to six colors, a technique inherited from the Paracas and Nazca traditions.


Among the most characteristic scenes are representations of the political, mythical and supernatural values such as the importance of the individual leaders, histories of the chaos returning to order, or the shaman’s transformation.  Moche art may be characterized as one of action, giving much more interest in the narrative than other Andean cultures.  Vessels may be of great variety; although the double handle and spout was the most used type due to its elitist connotations, they also created spout and bridge vessels, dual-chambered with whistles, offering plates, deeper dishes, others to pour liquids, and narrow-neck bottles. 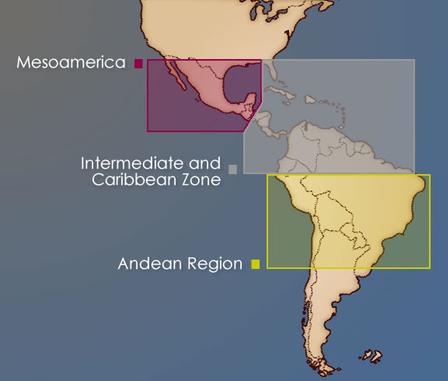 Empire to feed up to ten million citizens.

From its humble beginnings as a nomad tribe of Quechua language, the Incas persevered in their military intentions to eventually conquer and dominate the territory from Ecuador to Argentina.  Their imperialistic interests did not include cultural dissemination, just conforming to the administration of the territories as mere provinces that largely continued with their local traditions.  Therefore, the artistic tradition is the sum of its parts.  In very rare occasions we notice the fusion of styles between the local tradition and one properly Inca.
The greatest contribution to pottery is the shape of the vessel called “Aryballos”, which form is adopted in all the provinces and continued in use until the colonial era.  Pieces of art produced during the Inca hegemony are difficult to recognize and locate, therefore it makes them singular and costly.
Under the direction of Pizarro and in only a few decades, the conquerors finished the long trajectory of the Andean artistic development.

The ceramics produced by this culture receives characteristic influences of other cultures more to the north of the territory like Ecuador and Colombia and not so much from their southern Andean neighbors.  The technique is primitive and “caricaturesque”, but narrative and pleasant.  Their most characteristic form is the double bottle with spout and bridge, always being the visual front the main figure.  The final decoration consists of a slip or painted with the negative-resist technique. 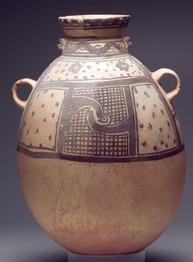 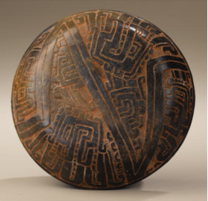 New local hegemonies arise from the disintegration of the Wari Empire and resurge with new religious and artistic traditions.  Based on a local legend of the Naymlap myth, an iconography rises that will prevail for the upcoming centuries. New forms like bridge and spout in solid black clay, others painted and even in gold and silver, will meet the demand of the people and the elite.  Simple-mouth bottles utilize the same myth as a source of inspiration in their decoration. This tradition will be absorbed by the emerging Chimu kingdom, which starts to emerge in the region by the time of their decline. 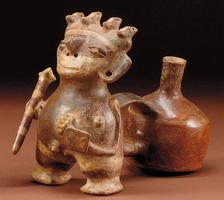 They share the origin of their culture in Pukara with the Tiahuanaco culture, with future divergence of contact and influence, competition and war, developing in the area north of the high plateau and the Titicaca Lake towards the Atacama Dessert.
The art in ceramics continues the Nazca tradition of combining geometric and naturalistic elements, however, their iconography is more based in a reactivation of the Chavin symbols.  In the decoration of the vessels, we notice the continuous use of the theme of their harvests.  The most authentic symbol is a series of steps, abstract representation of their agricultural advance under extreme climate conditions.  In the upcoming centuries these advance will help the Inca 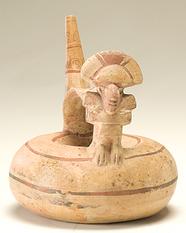 Contemporary to the Moche, but out of their political influence, lays the Recuay culture, which produced countless ceramic pieces with Chavin and Moche influence.  Their representation is more narrative and almost “caricaturesque”.  Their technique is very precise and shows a great control of the shape.  The finish, with a high content of kaolin, results in pieces of high shine, cheerful and refreshing.  It highlights the negative-resist paint method in which areas of the vessel to be painted were covered to then leave the negative of the created image.  War and fauna are prominent within their themes. 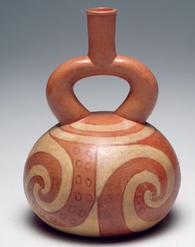 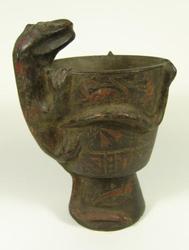 It is considered the first great culture of the South American continent.  The origins of their culture are found in deeper areas of the tropical jungle since their main religious symbols are the jaguar and the eagle.  The artistic production of this culture disseminated and influenced multiple cultures that will develop parallel and subsequently.  Through textiles and portable goods, they could show their ability and style and broadly disseminate their aesthetic vision.
Chavin art is very complex and esoteric because it is intentionally created to make its understanding difficult by intending to disorient, and by consequence alter the reality of the observer.  Part of the success of the style is based in the intense visual messages inherent in their art.  The strong perceptive effect, clearly calculated by their artists inspire confusion, surprise, fear and admiration through the use of ever changing dynamic images, which could be read differently depending on the focus.

In the north coast of today’s Peru this culture shares the hegemony of the territory with the Lambayeque culture for several centuries until its eventual disappearance to the Wari Empire.  Properly, its cultural definition is one of territorial outpost, conquests and war.
Moche art is fairly valued as one of great reach in the Andean aesthetic because of its sacred and secular mix of themes, and a novel way of treating them.
The Moche style utilizes naturalism as the base of its message over different existential levels, for example, animal hunting, the bleeding of prisoners of war, shamans’ curative visions, etc.  The challenge for the modern observer is what at first view results objective, descriptive and evident might be operating in superior symbolic grounds.  This symbolism in their ceramics was practiced to decipher what was inside them, both physically and spiritually.  It is the play of intervention between the “moment” and the “essence” that gives Moche art its power of continuance.

The artists from the south coast of Peru were initially influenced by Chavin art, but finally took their own direction by demonstrating new effects with technique, color, curvilinear design, and by exploring local themes in one of the most naturalist styles in the ancient Andean cultures.
In ceramic vessels, the double-spout evolves towards one of spout and bridge.  New colors emerge like mustard, olive green, which are applied now after burning, plus the traditional terra cotta, black and white.  They utilized the incision technique to delimit areas of color, that now tend to be more detailed and ornamented, and to draw geometric figures intertwined to representations of animals, birds, and gods, accomplishing a symbiosis between the representative and the geometric.  The also combined bi-dimensionality with three-dimensionality in a sole piece, a remnant of Chavin art influence. 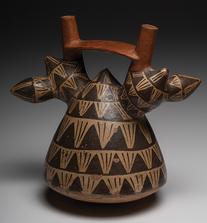 tendency to occupy all the visual space, giving a more baroque aspect to the work of art.  Also, the bi-dimensional combination of the drawing with the tri-dimensional of the jar is explored but in a very subtle, almost imperceptible manner.
The Andean concept of interpersonal relations as well as the relation with their cosmos is not one of uniformity, but one of balance and reciprocity.  This way, Nazca art is full of images of abundant harvests, shamanic rituals, and calibrated geometric elements that express the delicate position between humans, nature and the supernatural realm. 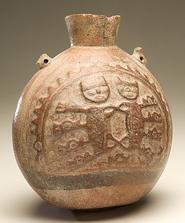 The development of the Chancay style surges from local traditions of the disappearing Wari hegemony.  One the most prolific pottery traditions of the territory, Chancay develops an unmistakable style.  Its minimalist coloring in beige and black, or beige and red were the only explored chromatic combinations.  Their shapes are original and tend towards a large format, both in vessels and in figures.  The vessels’ decorations replicate textile and geometric patterns common to their culture.
Representations of men and women with open arms as well as their fauna are typical.  Large jars of thin walls and big handles were manufactured for water and the preservation of fermented beverages.  They largely utilized molds for their production to meet a growing demand.  Generally speaking, their mass production did not allow them to concentrate in the quality of the pieces, although there are some magnificent examples in originality and execution.

The Chavin art themes along with their artistic effect might be called “hallucinating” and “transformational” or rather a substitutive visual metaphor.  The aesthetic problem of showing two states or realities at the same time developed the visual complexity just as a profoundly symbolic religious concept.  This iconography is integrated by deities, predators, zoomorphic-anthropomorphic hybrids and shamans in transformation.
As time went by, the Chavin art kept simplifying and developing an iconographic abstraction while its symbolism took root to the cultural vocabulary of its population.  The technique of its potters was impeccable.  They developed the dual fret mouth system in their bottles, what allowed air to enter and liquid to exit at the same time, which was transformed and utilized by all the Andean cultures for centuries to come.  However, their decoration is very measured and controlled, concentrating more in the texture, shape and finish of their pieces, and in the balance of all these elements in the final work.  Among their most recognized subgroups are Tembladera, Jequetepeque, Cupisinique and Chongoyape among others.